The start of the race was on Friday 10th of February at 20.00 hrs in the main street of authentic town Røros. It was quite the spectacle with a big crowd in the streets,  an inverno of barking dogs and lots of lights. Before start I had two worries on my mind: To not get so cold that I would not be able to care for the dogs;  (It was forecasted temps of -20°C. and below which made me buy an extra parka and have 5 layers of clothing on) and the other worry was to get out of town in one piece.  I had made sure to have safetyhinges on my pants in case I would fall in the first sharp turn in the street and be dragged behind the team. (Those hinges would cause me to use lots of time later in the race at checkpoint Søvollen)

When getting the team ready for start, I was not sure who to take in lead together with Pamuk as other main leader Puak is weary of crowds and loud music. His sister Olive seemed to be responding well to all the noise and excitement and although not a very experienced leader she is a great pacesetter. Both Pamuk and Olive were very focused and happy when put in lead, so I felt this would be safest. When we were standing  on the start line waiting for the countdown, the speaker informed the crowd that our team were purebred Siberian Huskies and added that those are good dogs for touring trips but not so much for racing.
Well, we would see about that. . 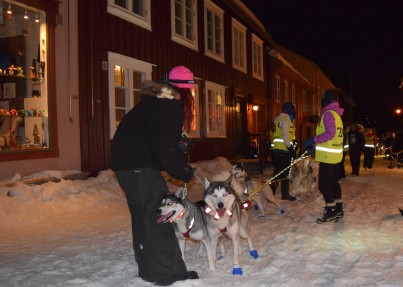 The dogs were starting out with full power and charging up the street which is going uphill until a sharp turn to the right takes us out of the town. I was so relieved when we made it alright passed there. Now we were out in the woods and hills. The dogs were running awesome and seemed to be planning to overtake all teams in front. I had already after few minutes passed several teams and with start nr. 26 of 76  teams I felt this was going far too fast. I tried to calm them down by voice and standing on the brakemat, but they were too excited so I had to use the big brake short and firm while asking them to take it easy. The trail was hard and fast and worn down booties were abunded laying in the trail. As it had been mild and then freezing for the last days, lake Femund was only black ice so the trail was detoured to the mountains and the stretch to first checkpoint Tufsingsdalen was now 93 km. instead of 75 km. It was a beautiful night with full moon and stunning mountaineous scenery. I was enjoying it the fulliest but got a slight feeling of panic when I was looking at my gps after ca. 6,5  hours and it showed 111 km. while we were still not at the checkpoint! I could not recall where we could have gone wrong and I saw still trailmarkers as well as headlamps of the other teams behind me, but my gps obviously had a ‘bad day’ probably because it was put on long time ahead of the actual start because we had too many other things to think of. Luckily we did get to the checkpoint soon afterwards and without getting lost, but my gps had logged 112 km. instead of 93 km..
The dogs had been awesome but I had to slow them down for the entire stage which was showing on them.
We arrived at the first checkpoint at 02.58 in the night as nr. 14 after 6 hrs. and 32 minutes while the frontrunner used 6.09. 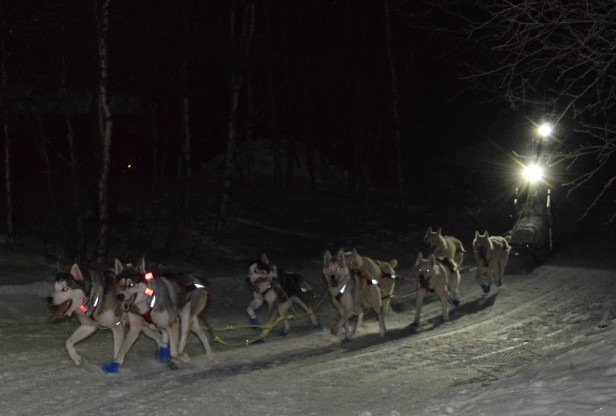 In Tufsingdalen we had a 4 mandatory rest and time equalization so we were allowed to get out at 08.01 in the morning. The dogs ate well and were resting well and when I greeted the team in the morning they were awake and alert. I gave them more snack,  cared for their feet and bootied them and when I had only two minutes left, I was asked by Karsten if I had checked myself out at the secretariat?  I got confused as I thought I could sign out with the functioneer at the out gate of the checkpoint, but according to Karsten I had to go into the secretariat office and to give the GPS tracker. I had been told at the mushermeeting that our GPS tracker had to be loaded in Tolga, not in Tufsingdalen! Now I got stressed and asked a volunteer, telling me it was better to check. So while the team was totally excited and ready to go, I ran to the office and gave them my tracker to check. They only registered the number, but I did not get a new one although apparantly the battery was flat. Through all this hectic we lost one minute when going out. The dogs flew out of the checkpoint in full gallop.

The next stage to Drevsjø was 60 km. in relatively flat terrain with large stretches going on the lakes. It was a beautiful day with sunshine and blue sky and it felt that with my 5 layers of clothing I was badly overdressed.  We were running pretty much together with bib nr. 138 and we were only few minutes behind him to Drevsjö, although the result service of Femund tells differently and thus wrongly, probably because my gps battery was flat. Just before coming to the checkpoint I took off the booties and the dogs would run without for the next 73 + 83 km. to Tolga. 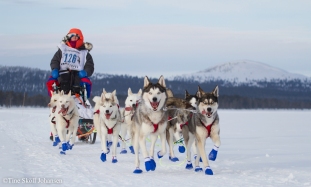 It was exactly noon when coming into Drevsjø and the dogs came in at a gallop. I told the time checker we were going to stay for an hour. We were pointed to a resting spot were there were much droppings from a previous team laying around so I asked for a different spot. Now we were directed very close to the crowd and this together with the noise from the loudspeakers was distracting the dogs. I offered them a soup but they were not very interested so in the end I gave them a couple of snacks before we headed out at ca. 13.00 hours. Also this time the dogs started out in full gallop.

The scenery on our way to Søvollen was once again beautiful and when the sun started to set it became even more magical. The leg from Drevsjø to Søvollen is 73 km. and when arriving at the checkpoint the dogs had been running 223 km. Even after this distance, I had to calm them down and kept telling leader Pamuk to keep a trot as he  wanted to get up the speed all the time.
In Søvollen we arrived at around six o’clock in the evening and it was the plan to fetch only the snacks for the next leg from the depot and continue. When I was searching for the depot, I got the desperate urge for a pee and had to find the bathroom. When I finally found it, I had problems to get of my layers of clothing in the crampy little outhouse. Head lamp and battery pack, camelback, 4 layers of clothing and those stupid hinges of my pants had to come off and it took forever. When returning back to the team I was met by a furious Karsten who wondered what the hell I had been doing. The dogs had started to lay down and could go stiff if they would have to wait any longer. When I was ready, the dogs were luckily still eager to go and did not seem to have any problems from the rest that lasted in the end 30 minutes. At 18.30 hrs. we left checkpoint Søvollen and were in 10th place.

The leg of 83 km. from Søvollen to Tolga was in darkness, but again there was this awesome moonlight and no wind. I recall the fabulous scenery and atmosphere. The trees were covered in a thick layer of snow and we passed desolated cabins like out of a fairytale. We were quite high up and down below was the village of Tynset were the trail was winding down to. It went down via numerous bends and curves, definitely not a boring trail. I just wondered how this would have looked in day light as to me it seemed as if we were really going down from high and steep mountain plateau to the valley. Maybe it would all not be so dramatic in daylight as it seems in the night when one sees only the city lights flickering far down below, making it look dead steep. Once again, I was happy to run only an 8 dog team and felt this was plenty enough to handle as the dogs were still so eager.
When coming to Tynset I had been warned to be extra cautious as the trail was splitting between the F400 and F600. There was a road crossing where one had to be extra careful but Pamuk and Olive listened very well and we managed to keep the right trail.
On our way to checkpoint Tolga, it was obvious we were entering a farming area as the smell was quite distinct. We passed farm after farm and after a while I really started to hope that the next spot of light would mean we had reached the checkpoint, just to find out it was yet another farm. The dogs were running well, but few kms. before the checkpoint there is this enormous steep hill to climb better known as the’ Tolga wall’ which I had forgotten about. Now it was there.  I was helping as good as I could but gosh this seemed endless! I was lucky to have such a strong team, but I imagine running here with tired dogs.. definitely a challenge to say at least.

Not long after the hill, we reached the checkpoint of Tolga, 306 km. in the race, after a run of 6.05 hours, while the frontrunner had used only 4 minutes less. We arrived half an hour past midnight and would have an 8 hours mandatory rest before starting out on the final leg of 68 km. to the finish in Røros.